Contemporary reflections on the lives of Jazz and Blues women and their legacies
Fortnightly online participatory Zoom sessions Feb 26th, March 12th, March 26th April 9th
8pm UK time
www.strangerfruit.net
Transculturalvisions in partnership with Griots Arts and Outerglobe presents Stranger Fruit: Contemporary reflections on the lives of Jazz and Blues women and their legacies, a participatory zoom programme with fortnightly sessions between February 26th and April 9th 2022.  Arts advocates Debbie Golt and Marva Jackson Lord will host. Four contemporary women musicians of profile choose a fellow artist who inspires them and will share how their own music and practice is impacted by their chosen person. Each session will feature illustrated interviews with Sharron Macloed (voice/flute), Charlotte Keeffe (trumpet), RENU (percussion) and Roella Oloru (multi-instrumentalist) in turn. They will play their own music live inviting the others and eventually audience members to join in open ended improvisations together in real time on zoom. Visual artist Clare Marshall will paint inspired by the music and discussions during the zoom. The sessions will be free and participants will be able to register via a website - www.strangerfruit.net
Bilkis Malek, Director of Transculturalvisions said ‘Women are central to the origins and evolution of Jazz and Blues and have inspired some of the most famous musicians and their contributions are not always well known. I think of Ma Rainey whose gravelly vocals inspired Louis Armstrong, Janis Joplin and Bonnie Raitt and Victoria Spivey who nurtured the talent of Bob Dylan. There is also Mama Ray Thornton who originally recorded Hound Dog which was one of Elvis Presley’s biggest hits. Stranger Fruit picks up on this theme with our four invited musicians who look at artists who they have been inspired by and who in turn may not be so well known or understood.”
As might be assumed, the title Stranger Fruit is indeed inspired by “Strange Fruit” originally sung by Billie Holiday, written by Abel Meeropol. The song is recognised as a protest against the lynching of black Americans and identifies the victims with the fruit of trees. The central invitation of the series is to imagine what would it be like if strangers were seen as a product of a society, or community’s own making, voices highlighting our fault lines and how we might imagine things differently. Taking this as a theme the series also aims to represent women as being in charge of their destinies and not victims as the Blues and Jazz women are so  often portrayed when they do get a mention. In fact women have been central to the origins and evolution of jazz and blues and advocates of female empowerment through independence, sassiness and sexual freedom. Through the series as each musician reflects on the how their chosen artist inspires them and how their music, innovation and style has made a difference to their own approaches and development, the aim is to transform perceptions of women’s impact on contemporary music and culture. Perhaps a more liberating view of identity and understanding of differences will emerge. 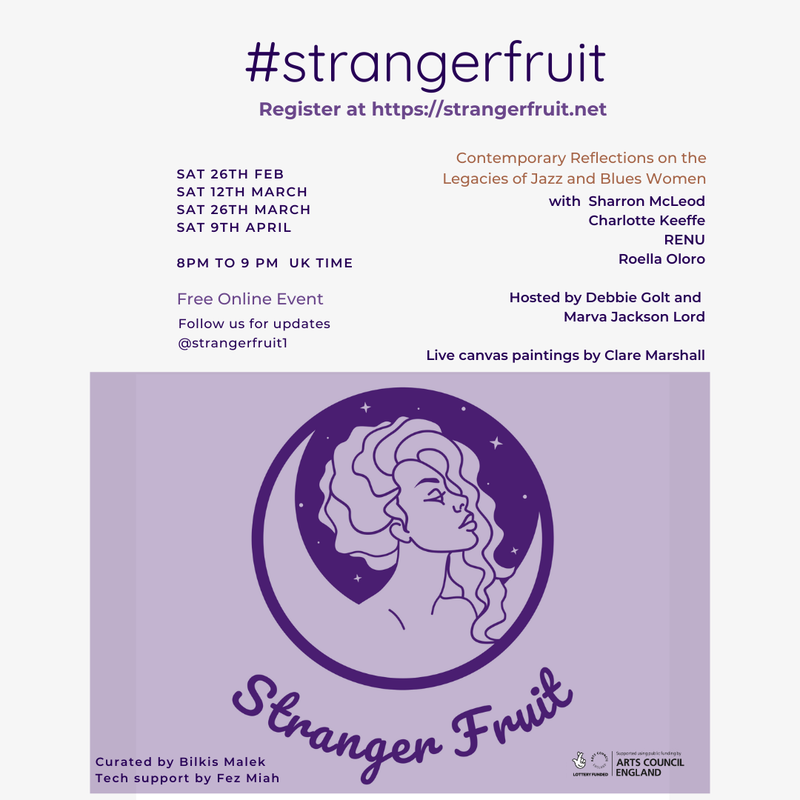