Dr Angela Elizabeth Slater on continuing to shine a light on the work of women composers and performers in Illuminate Women’s Music 2019 Seasons I and II.

2018 marked a wonderful year for celebrating women’s music with new organisations, projects and individuals working with unwavering dedication and passion in this area. Examples include a number of excellent resources: Archiv Frau und Musik, Composer Diversity Database, Music Theory Examples by Women (MTEW), International Alliance for Women in Music (IAWM), The Daffodil perspective (a radio show dedicated to women composers), A Modern Reveal, Salon Without Boundaries and Illuminate Women’s own blog series as well to name a few. There are also lots of wonderful festivals and organisations that have recently been established including Lili Boulanger Initiative, Scordatura, Sounding the Feminists and - new to 2019 - Cambridge Women’s Festival, to name but a few.

2019 will also see Kings Place’s new award-winning flagship series focusing on the creative firepower of women composers: Venus Unwrapped. Across twelve months and more than sixty events, this series will explore the history of music by women, beginning with medieval nuns and moving through to modern times. This series of concerts be a hugely welcome addition to the mission of bringing women composers to light.

2018 also saw many festivals across the world sign up to the PRS Keychange Initiative for 50/50 gender balance in programming by 2022. Subscribers include significant festivals in the UK, such as BBC Proms, Cheltenham Music Festival, Huddersfield Contemporary Music Festival, Spitalfields Music, and many more.

Evidence of these developments can be found in the Women in Music survey, which shows positive change in BBC proms 2018 programming. In 2017 women composers only constituted 7.5% of all composers programmed, whereas in 2018 saw this number rose to 14%. Representation of women composers in the living composers category rose from 22% to 40%, as did BBC Proms commissions of female composers which grew from 30.8% in 2017 to 63% in 2018. This is a huge shift that demonstrates a good statement of intent which will hopefully bring about real and substantive change in future programming.

However, surveys of 2018 programming were not universally positive. Bachtrack’s annual survey showed that only 17% of the contemporary music performed in UK concert halls in 2018 were by women composers, compared to Sweden that had 37%. Figures in other countries aren’t much better with 16% in the US and as low as 5% in both France and Germany. Statistics compiled by Donne Women in Music Project show that across a sample of leading orchestras and concert series, only 76 classical concerts out of 1,445 performed across the world from 2018 to 2019 include at least one piece by a woman.  These figures also show a total of 3,524 musical works will be performed at those concerts, and, of those, 3,442 (97.6%) were written by men and only 82 (2.3%) were written by women.  The figure amounts to about 95% of concerts having music composed by men only. These examples demonstrate how important it is to keep this issue at the forefront of the minds of musicians, programmers, festivals and music organisations.

During 2018, the centenary year of women’s suffrage, the issue of women composers in concert programmes has been a particularly hot topic. Many new initiatives and pledges have been made by a variety of organisations and this is to be celebrated. As we leave the year of the centenary of women’s suffrage behind we need to be vigilant that these commitments do not fall by the wayside or become less important as time goes on.

Illuminate Women’s Music, now in its second year of running its touring concert series, is proud to continuing supporting women composers from both the past and present as well as particularly supporting women performers. The reason I originally set up Illuminate Women’s Music is still more relevant that ever, with programming only changing very slowly. Related to this, change in the pedagogical sphere is moving at an even slower pace. It is vital that women composers are seen and heard by the general public across the UK; as Betty Atterbury expresses, ‘Omission is a powerful teacher’ so we should seek change in our educational, programming and commissioning spheres.

Much of the concert-going audience, by their own admission, know very little about women’s music. This can be seen from Illuminate’s 2018 concert survey, which showed that 64% of Illuminate’s audience admitted to never having heard of any of the women composers on the programme before. By programming both historical and living women composers side-by-side in Illuminate concerts, I hope to continue to create a forum to celebrate creative women from across the ages. In the long term, I hope works by women composers will be considered as equal to canonic works whose places are safe in concert programmes. As our knowledge of female composers grows, continued omission is unacceptable; lack of a fair hearing leads to unjustifiable neglect. I hope through Illuminate Women’s Music, to begin to reverse the tide, even in a small way.

Illuminate Women’s Music has two seasons in 2019, supporting even more women composers and performers than before. llluminate’s first 2019 season (March-September 2019), which is supported by the PRS Foundation Open Fund for Organisation and Ambache Charitable Trust, supports five new commissions from composers  Kerensa Briggs and Laura Shipsey and Illuminate composers in residence, Angela Elizabeth Slater, Sarah Westwood, and Blair Boyd, for new works for Boston-based Prism trio and UK- based Ethel Smyth Trio . Having been premiered in Boston, MA earlier this year several UK performances are soon to follow, with visits to Brighton Music and Wine series at St Luke’s on 30th August, York Late Music series on 7th September, 14th September Music at St Mary’s in Stafford, and Stonevale concert series in Oxford 15th September. Historical works by Morfydd Owen, Grażyna Bacewicz and. Historical works by Morfydd Owen, Grażyna Bacewicz and Ethel Smyth will be programmed alongside these new works. Highlights will include Morfydd Owen’s 1914 piano trio, a work which has never been performed in the US and is little known in the UK, and Lili Boulanger’s D’un Matin de Printemps for piano trio. 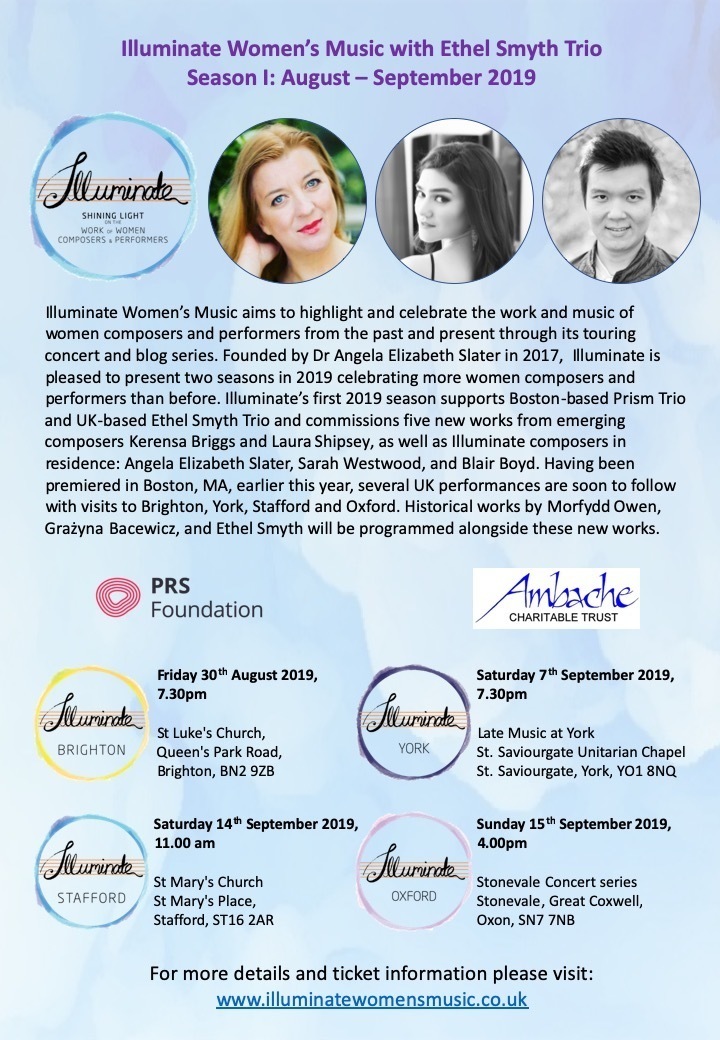 Indeed, Illuminate Women’s Music is delighted to be supporting the promotion of Morfydd Owen’s music again in 2019. 2018 marked the centenary of Morfydd’s death and therefore it is more important than ever to bring her music to audiences. In 2019 Morfydd Owen’s music will be performed across the UK at Ludlow English Song Festival in April, Llangollen International Musical Eisteddford in July and, excitingly, the Cardiff University Chamber Choir are planning to tour some of Owen’s choral music in China at the end of the year. You can find out more about the recent surge in interest of Morfydd’s Owen music in Dr Rhian Davies recent blog.
https://www.illuminatewomensmusic.co.uk/illuminate-blog/morfyddowen100-thoughts-on-the-centenary-of-the-death-of-morfydd-owen-1891-1918-rhian-davies
Illuminate Season II (September-November 2019) sees the formation of the Illuminate string quartet from performers Clarice Rarity (violin), Christine Cornwell (violin) Katherine Clarke (viola) and Cecelia Bignall (cello) who will also be joined by soprano singer Patricia Auchterlonie. Season II has commissioned  Illuminate composers in residence as well as Caroline Bordignon, Yfat Soul Zisso and Joanna Ward. Illuminate Season II will start at University of Bangor’s Second International Conference on Women’s Work in Music on 5th September, highlighting historical composers Rebecca Clarke, and Barbara Strozzi. This is particularly significant as 2019 marks the (birth) anniversaries of composer Barbara Strozzi, and the 40th anniversary of the death of Rebecca Clarke. 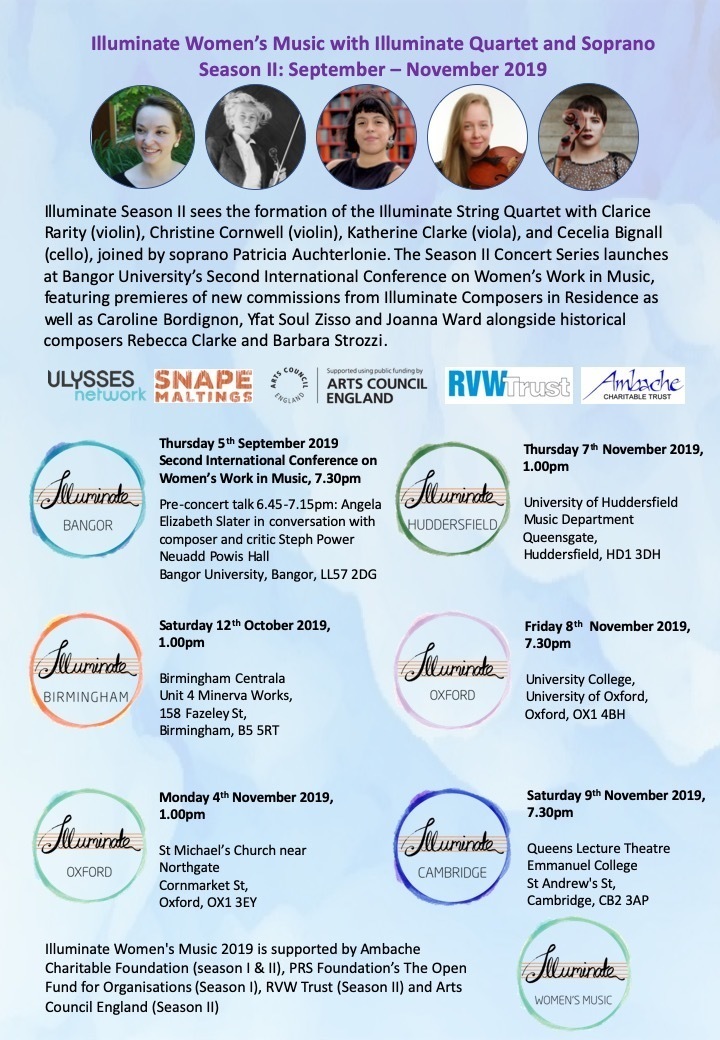 Illuminate Women’s Music 2019 concerts will showcase the rich and exciting variety in women’s music, rightly bringing this wonderful repertoire as well as new works to new audiences both in the US and UK! I hope you will join Illuminate for both our season I and II concerts this year to celebrate the music and work of women composers and performers. 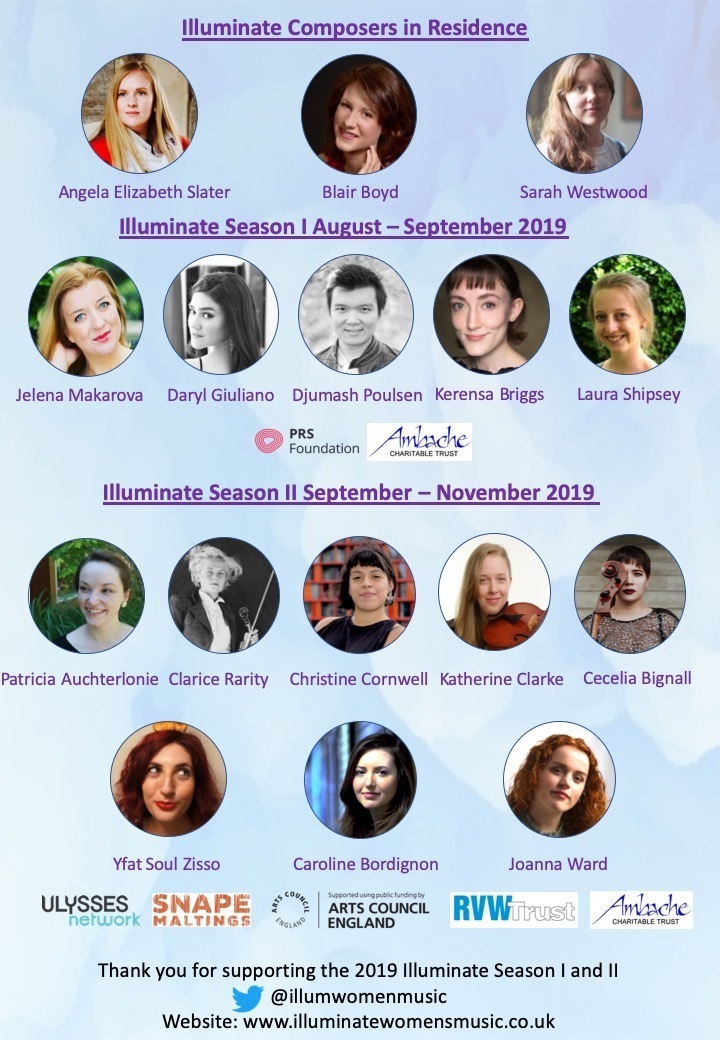 
The Silesian String Quartet play Grażyna Bacewicz's Piano Quintet No 1 with Wojciech Świtała at the piano, along with Mieczysław Weinberg's String Quartet No 7.

The new autumn season begins at the Second International Conference on Women’s Work in Music at Bangor University on Thursday 5th September at 7.30 pm with a pre concert talk by Dr Angela Elizabeth Slater at 6.45 pm, at Neuadd Powis Hall, Bangor, Gwynedd.

More details of this and the entire autumn schedule are here

And watch this space for more posts about this excellent project.

As part of the Henry Wood tribute concert tonight at the BBC Proms you can hear the premiere of Dobrinka Tabakova's BBC Commission Timber & Steel.

Tabakova's music is well-known for its depth and vibrancy.

The Amatis Trio play chamber music by Clara Schumann and her husband Robert.

The Lost Words - a concert inspired by the book by Robert Macfarlane - nature inspired music including new commissions from Jocelyn Pook and Alissa Firsova. The Southbank Sinfonia and National Youth Choir of Great Britain conducted by Jessica Cottis.